According to KSH this morning:

In the period of January–November 2007, the volume of exports augmented by 16, that of imports by 12 percent as compared to the same period of the previous year. In forint terms, exports rose by 10 percent, imports were up by 6 percent. The growth rates in euro were 17 and 12 percent. The trade deficit amounted to HUF 73 billion (EUR 295 million), which is lower by HUF 528 billion(EUR 1956 million) than one year earlier.

Hungary posted a trade surplus of EUR 60.6 million in November, according to revised figures released by the Central Statistics Office (KSH) on Friday. The final number was revised downward from prelim EUR 70.1 m.

Nevertheless, there was a considerable fall in the growth rate of both exports and imports in Nov.

As they note, the fading momentum can be primarily attributed to a downturn in the European business environment, which is also underpinned by the fact that parallel to the deceleration of growth, the gap between export and import growth has also shrunk - it dropped to 2.6 ppts in Nov, down from prelim 2.7 ppts, and 3.9 ppts in Oct. And remember this is back in November, the situation since has only deteriorated.

All of this takes me back to yesterday's post about the GKI institute forecast, and about how sensitive Hungarian growth is now going to be to external factors, since at the present point in time it has to be largely export driven. Another of the Institute's with an optimistic view - Ecostat, who are still forecasting 2.3 - 3% growth for 2008 - make a good point despite the rosy conclusions they draw:

The engine of Hungary's GDP growth on the production side is primarily the export performance of the manufacturing industry. Some 80% of Hungary's exports are generated by large enterprises, the performance of which hinges on the external business environment, especially that of Germany. If the euro zone expands at a smaller-than-expected rate due to US recession and turbulences on the money markets, the domestic outlook worsens with it, especially because diminished export demand can be offset by domestic purchasing parity only to a smaller extent

I think this is the whole point, and since the outlook in Germany is worsening by the day, this is why I think 2% or 3% growth estimates for 2008 are living in cloud cuckoo land. After seeing the trade revisions and the bank lending numbers for December I am still holding my breath as to whether Hungary will have had its first quarter of negative growth in Q4 2007. 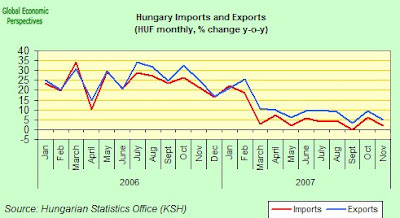 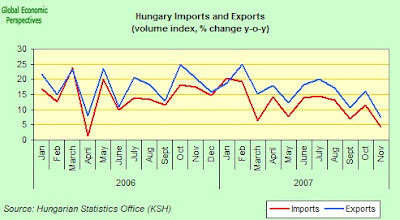 The strategic importance of Germany for Hungarian exports is evident from the following chart which I have prepared from KSH data. What is not clear is the extent to which these products which go to Germany are subsequently processed for re-export (the Bazaar Economy hypothesis of Hans Werner Sinn). Also, while I find the level of EU10 interconnectedness revealed by the chart to be fscinating, I am not at all sure why, for example, Hungary should be exporting roughly the same proportions to the Czech Republic or Slovakia as it is to the much richer and larger UK or France, unless these countries all form some sort of dis-aggregated supply chain system to service the huge German export machine. Doubtless this will all now become much clearer as German exports ex-EU10 start to seriously slow, but all of this is surprisingly reminiscent of patters I have observed between Japan and China, Singapore, South Korea and Taiwan, where at the end of the day the whole edifice is incredibly sensitive to movements in final demand in the US and Europe. Just a hypothesis to follow up and test a bit at this point. 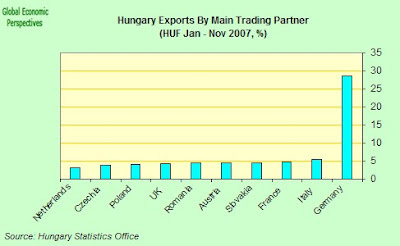