Quietly clicking my way through Bloomberg last Sunday afternoon, I came across this:

Facebook Inc., the world’s largest social-networking site, said members registered new user names at a rate of more than 550 a second after the company offered people the chance to claim a personalized Web address.

Mein Gott, I thought to myself, if 550 people a second are doing something, they can't all be wrong. So I immediately signed up. Actually, this isn't my first experience with social networking since I did try Orkut out some years back, but somehow I didn't quite get the point. Either I was missing something, or Orkut was. Now I think I've finally got it. Perhaps the technology has improved, or perhaps I have. As I said in one of my first postings:

Ok. This is just what I've always wanted really. A quick'n dirty personal blog. Here we go. Boy am I going to enjoy this.

Daniel Dresner once broke bloggers down into two groups, the "thinkers" and the "linkers". I probably would be immodest enough to suggest that most of my material falls into the first category (my postings are lo-o-o-ng, horribly long), but since I don't really fit any mould, and I am hard to typecast, I also have that hidden "linker" part, struggling within and desperate to come out. Which is why Facebook is just great.

In addition, on blogs like this I can probably only manage to post something worthwhile perhaps once or twice a month, and there is news everyday.

So, if you want some of that up to the minute "breaking" stuff, and are willing to submit yourself to a good dose of link spam, why not come on in and subscribe to my new state-of-the-art blog? You can either send me a friend request via FB, or mail me direct (you can find the mail on my Roubini Global page). Let's all go and take a long hard look at the future, you never know, it might just work.
Posted by Edward Hugh at 11:49 AM No comments:

Well, I am busying myself this morning scratching around looking for green shoots in Turkey. But even as I was digging for these I couldn't help notice this coming in over the radar from Germany, courtesy of Bloomberg:

German exports fell more than economists forecast in April as the global crisis restrained demand, keeping Europe’s largest economy mired in a recession. Sales abroad, adjusted for working days and seasonal changes, fell 4.8 percent from March, when they rose a revised 0.3 percent, the Federal Statistics Office in Wiesbaden said today. Economists expected a 0.1 percent decline in April, according to the median of 10 estimates in a Bloomberg News survey.

So German exports have not touched bottom yet - they are still falling. Since the German economy is export dependent, then this implies the obvious, the German economy is still contracting. I don't think anyone ever doubted this, but looking at the way some of the material has been presented recently, it wasn't always clear. Indeed year on year, exports fell by 22.9%, the fastest rate so far, although since these annual stats are not working day corrected I wouldn't read too much into that just yet, since you really do need to average across March and April due to the Easter impact. 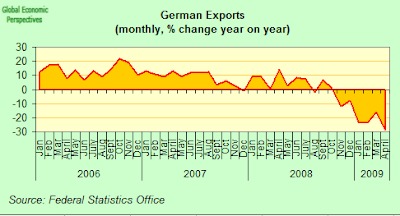 Another country where rather unsurprisingly we aren't seeing too many green shoots at the moment is Estonia, and only today the statistics office reported that exports decreased by 38% and imports by 41% (year on year) in April. 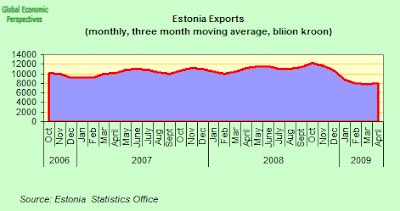 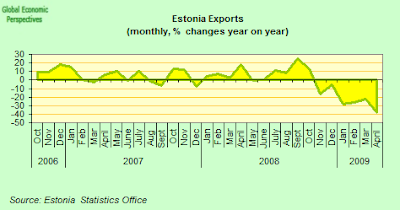 As a result the Estonian trade deficit rose for the second month running, and hit 1.8 billion kroons. So what we are seeing here is a distinct move in the wrong direction, on both counts. We also learnt from the Estonian stats office today that GDP contracted by 15.1% (year on year) in the first three months of this year - a figure which was revised down from the earlier flash estimate of 15.6%. 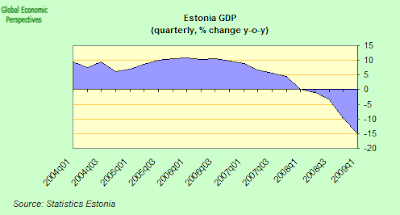 Compared to the 4th quarter of last year, seasonally and working-day adjusted GDP decreased by 6.1% (more on all this in another post). 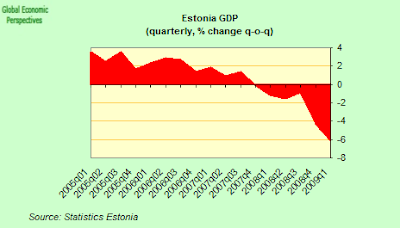 Finally on the green shoots front for today, we could note that Hungary's industrial production plummeted in April by 25.3% (year on year) according to working day adjusted data released by the stats office. This compares with a year on year contraction of 19.6% in March. 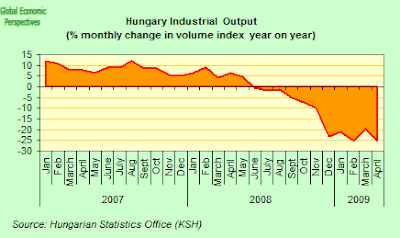 Month on month there was seasonally and working day adjusted drop of 5.1% in April, following 4.5% growth in March. So again, output is still falling, and no bottom has been reached. 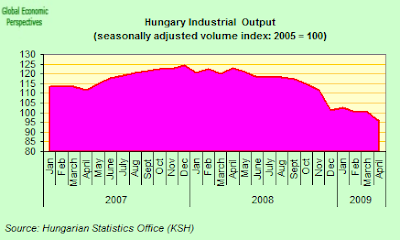 This latest Hungarian data is particularly unpalatable following a number of reports which had been left open the possibility that the downturn in the Hungarian economy had ground to a halt, or at least staretd to decelerate. If industrial output shows similar weakness in other East European countries then this does not augur well for future German and eurozone output, since Hungary plays a significant role in the early stages of the European manufacturing production chain.
Posted by Edward Hugh at 7:01 PM No comments: