Hungary posted a foreign trade surplus of EUR 279.2 million in February. As a result the balance for the first two months has turned positive (EUR 85.1 m). That is the good news. The bad news is that the surplus is entirely due to the fact that imports fell more rapidly than exports, which collapsed by 30% year on year. Hungary's exports totalled EUR 4,471 m in February, which marks a shocking 29.7% fall from the year before. Imports also crashed : at EUR 4,192 m they were down by a staggering 32.3% from February 2008. 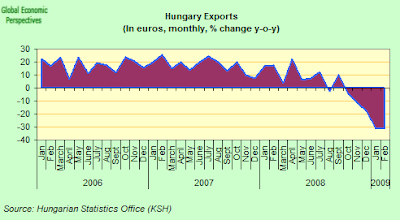 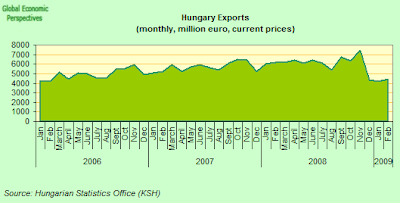 
As Hungary is now an export dependent economy, it is not surprising to see that Hungary's industrial production also plunged on the drop in export demand. Output was down 28.9% year on year in February, according to unadjusted figures, while on a working-day-adjusted basis there was a 25.4% decline, sharper even than the 21% drop seen in January. The statistics office has changed its methodology since the early 1990s so a direct comparison with earlier figures is not really possible, but the office said the February drop is probably the largest monthly fall since the collapse of Communism at the end of the 1980s. 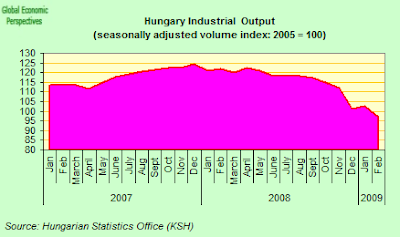 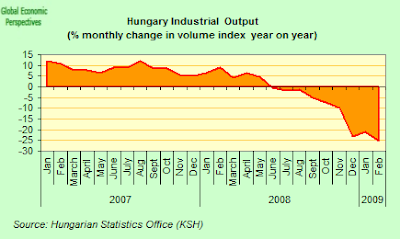 Loan Defaults The Main Threat Now As The Forint Weakens


According to the latest financial stability report regularly published by the Hungarian central bank on condition the economy performs in line with mainstream expectations and contracts by 3.5 per cent this year, with the exchange rate stable at aound 290 forints to the euro, banks would be able keep their capital ratios above 10 per cent of total assets. This is, in theory, comfortably higher than the international regulators’ 8 per cent minimum. But under a “stress scenario”, whereby gross domestic product falls 10.5 per cent and the forint slides by 15 per cent, capital adequacy would reach the 8 per cent level, and banks accounting for nearly half the total assets would fall below the minimum.

The latest IP and export data confirm that the Hungarian economy is indeed deteriorating faster than expected. The forint is currently trading about 6 per cent below the central bank’s baseline forecast, while GDP forecasts of minus 5 per cent or worse are now commonplace. And even this is not the complete story, since as the central bank’s report says: “The calculations described above are characterised by considerable uncertainty . . . [making] credit risk forecasts very uncertain.”

Among the most evident points of uncertainty is the rate of household and corporate loan default. HSBC Holdings Plc, Europe’s biggest bank, expects loan delinquencies to reach 23 percent in Russia before the crisis is over, making the level Europe’s highest rate after, guess who, Hungary where they anticipate bad loans will reach 25 percent of the total.
Posted by Edward Hugh at 8:03 AM 4 comments: