Hungarian retail sales fell for the 11th consecutive month in December following the impact on consumer demand of government austerity measures to reduce what is still the European Union's largest budget deficit. Retail sales declined at an annual rate of 4 percent, following a 4.2 percent drop in November, the Budapest-based statistics Office said this morning. 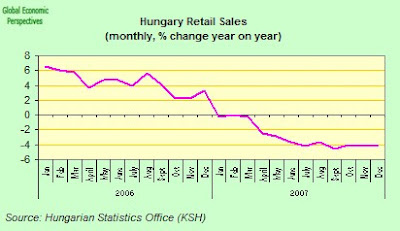 Looking at the above chart, we could say that the drop in the rate of change in y-o-y retail sales has now bottomed - ie the rate of contraction is no longer accelerating - but sales continue to cntract nonetheless (as can be seen in the chart for the index below), and there is no reason to expect any short term improvement in this contraction process. If Hungary is to turn round its economic growth problem it will need to export far more, but to do this it will need to become far more competitive, which means that it needs to do something to stop inflation, Hungarian enterprises need to improve substantially their productivity and the central bank needs to address the issue of the overly high valuation which the HUF now has. 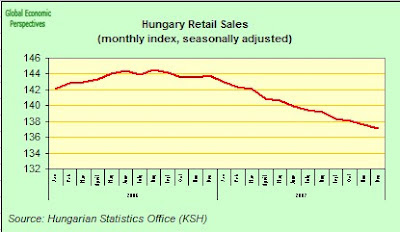 A large part of the problem here is inflation, and the fact that consumers have had less cash to spend following government inspired increases in taxes and utility bills in an attempt to narrow the budget shortfall. This has helped to drive up the inflation rate its highest level in six years.

Central bank policy makers, who will meet on Feb. 25 to discuss interest rates, held the benchmark two-week deposit rate steady last month at 7.5 percent, citing the surge in food and energy costs which the suspected could create inflationary pressure. Obviously an unholy row has broken out among analysts at this point about whether to raise rates (the inflation expectations argument) or cut them (the weak internal demand argument). This debate has in part been provoked by the fact that the central bank last month considered a rate increase for the first time since February 2007. Few analysts, however, seem to be looking at any of this in the longer term, and asking themselves - by looking at countries like Japan, Italy and Germany, with their ageing and nearly contracting populations - just how realistic it is to expect Hungary's ageing (and declining) consumer and working population to go back to fueling a consumer or property boom, or to be able to achieve the sort of increases in aggreagte productivity necessary to achieve a respectable growth rate via export driven demand (especially given the "leakage" in the current account via dividend payments on prior investments). Basically Hungarians do not save anything like enough to fund their economy at its current GDP level, let alone propel a great forward leap. This situation is in no small measure connected with population ageing in a context of low accumulated collective wealth (Japan, Germany and Italy do not have the massive monthly outflow on the income account). Thus, if people don't ask themselves just how it was (and why) that Hungary got into this mess, there is little hope of them being able to advise on how to get out of it.
Posted by Edward Hugh at 10:18 AM