The Price Of Power

Hell, it seems, knows no fury like the financial markets being told you are about to become the next Greece. The poor Vice President of the election-winning Fidesz party, Lajos Kosa, had no idea what was in store for him when he calmly announced to a group of astonished journalists that Hungary was in the throes of a sovereign debt crisis not disimilar from the one Greece has been passing through. The value of the forint immediately fell sharply, and a whole army of government spokesmen – lead by incumbent Prime Minister Viktor Orban – had to rush for the microphone to try to clarify that the man didn’t mean what he had just said.

There then followed several days of political and financial chaos which saw market valuations rocking across the globe till finally the government issued a series of new measures designed to try and bring the country's fiscal deficit problem back under control. Thus ended a brief and ill-fated experiment in alternative anti-crisis measures - one which in fact lasted for just under a month (the month we lived dangerously, aka suddenly last spring). Hungary's new prime minister Viktor Orban has now sharply changed course, and said his government will cut public wages, overhaul the tax system and ban mortgage lending in foreign currencies in an attempt to reassure nervous investors he can contain the country's budget deficit.

After a sweeping victory in April’s elections, which saw the victorious FIDESZ party elected with a two-thirds majority, the incoming government unveiled a program which departed dramatically from that of the previous caretaker Socialist cabinet that had been following the outline of an IMF Programme introduced after the country narrowly avoided economic meltdown in 2008. Initially the party had pledged to cut taxes and create jobs in an attempt to stimulate the growth the country evidently badly needs to tackle its heavy debt burden, although such moves would obviously threaten targets agreed under the country's 20 billion euro European Union/International Monetary Fund bailout.

In fact Hungary has - for anyone who looked hard enough - been in an unsustainable fiscal position for some time now (try this article of mine in January, Is Hungary Another Greece?). It was obvious that the deficit was going to be higher than the 3.8% objective - indeed I personally clashed publicly with the Finance Minister (see his reply to me here) on exactly this issue back in January - and that the provisional figures coming out for growth from the statistics office were just a bit too good to be true. Furthermore, the underlying "cashflow" deficit (as in Spain, see charts below) was in fact higher because of the need to fund the losses of state companies and others (like the hospitals and other public entities where the previous government was simply funding the losses by classifying them as unpaid short term debts). Hungary had been lucky until the election in that the financial markets had been too busy with Greece, Southern Europe and the Eurozone to pay the country too much attention. Now that state of grace is well and truly over. 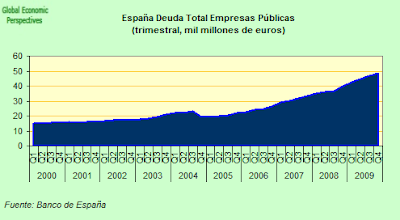 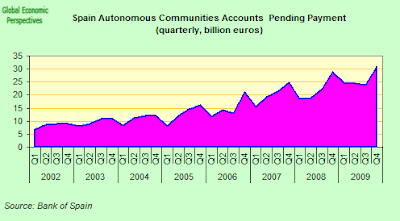 But beyond the immediate, headline-catching, story there lurk a number of issues with implications which stretch well beyond the frontiers of the small central European country. The first of these is the high preponderance of forex loans which have been taken out by Hungarian families (largely in CHF, they constitute over 85% of total mortgages). The presence of these loans has been a massive aggravating factor in Hungary's ability to conduct an effective monetary policy in a context of high inflation and low growth. Swiss franc loans are attractive in Hungary, since they are much cheaper than forint denominated ones, since while interest rates determined by the National Bank of Hungary are still over 5%, at the Swiss National Bank they are effectively near to zero. 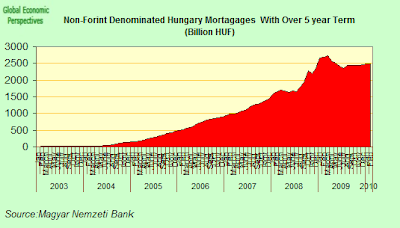 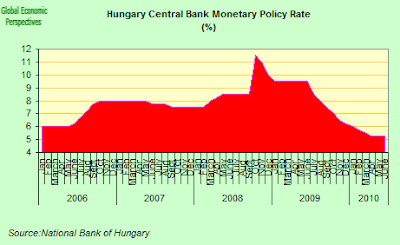 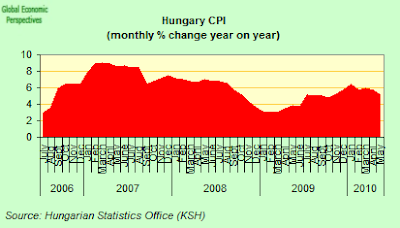 The second issue is the failure of the current IMF programme to return the economy to a sustainable growth path. The Hungarian economy contracted by 7% last year, and even while it grew slightly in the first three months of this year, the level of Hungarian PIB is still likely to fall again in 2010. A 5% increase in VAT last July, and increasing reluctance to take out more loans means that domestic consumption is still contracting, while the public sector has been in an ongoing adjustment process since 2006. This leaves the economy – like its Spanish equivalent – completely dependent on exports to obtain growth. Yet while Hungary now has both a trade and current account surplus, the heavy level of international indebtedness means that the burden of interest payments is heavy, and the capacity to generate export lead growth insufficient. 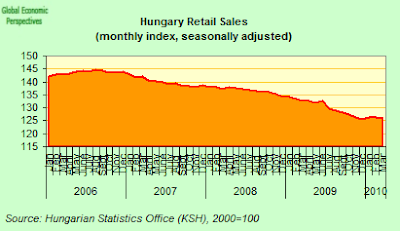 Of course, since Hungary is not a member of the Euro Group the country could devalue its currency, but the high level of external debt makes this very difficult, since the proportion of non performing loans the banking system would have to handle would rise sharply.

Finally, we have the political lessons. Having seen the experience of Greece, and now that of Hungary, it must be very clear to all that the traditional ploy of those who win elections against unpopular governments – of blaming their predecessors for the disastrous state of public finances – is now no longer open. The financial markets are indifferent to who is responsible, they simply want to know how the extra debt being made public is going to be paid. So the lions share of their anger inevitably falls on the incoming government.

Also, this kind of situation demands a high level of responsibility from opposition parties. This responsibility was not shown by the FIDESZ party. Indeed in 2008 they organised a succesful referendum against the constitutionality of a number of cost saving measures in the health system (see my post on this at the time), only to find that they themselves will have to introduce similar (if not identical) measures. The only casualty here is democracy. Countries facing problems which can lead to national bankruptcy need the maximum political unity and consensus in seeking a way out, and not short term political gests which can only bring more problems in the longer run. If pensions need to be cut, they need to be cut, if the only way to finance them is to issue more debt at a time when markets are tired of buying so much of it. The sooner politicians find the courage to recognise this the better, whether we are talking about Hungary, or other (let them be nameless) countries on Europe's periphery in similar difficulties.
Posted by Edward Hugh at 3:19 PM No comments: