Paying For The Drugs 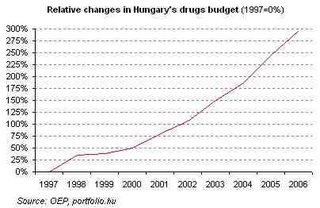 The above graphic (which comes from Portfolio Hungary) shows the relentless rise in the Hungarian drugs budget from 1997 to 2006. Now as explained in this post, Hungary is currently passing through what some have termed the second epidemiological transition. But this transition, unlike the first one, is not driven by improved nutrition in childhood and better public health, but rather life expectancy here is pushed up (from Hungary's comparatively low level of 68.45 - in the case of men) to levels which are more common elsewhere in the EU by the combined application of improved medicines and intensive medical care, both of which have significant costs associated with them. Hence the rise and rise of the drugs budget.

The big question, of course, is who will pay for this? Given the dire straits in which Hungarian public finance finds itself the answer seems far from clear, and this dilema is reflected in the current 'robbing Peter to pay Paul' tussle which the government and the major Hungarian drugs manufacturers are having.

The Hungarian Parliament has now passed what is supposed to be the final version of the new drug thrift bill. Portfolio Hungary offer a summary of just how the new regulation's impact on Hungary's listed pharmas Egis and Richter:


Key points of the Drug Economy Act:
- 12% flat rebate on all drug subsidies;
- annual HUF 5 million fee / sales representative;
- basis of producers' split payments into drugs budget is HUF 287 bn;
- joint coverage of spending overshoot by producers and state up to 9% miss (the larger the deficit, the higher drug makers' contribution is);
- full coverage of overshoot beyond 9% by producers;
- the section of the Act on the financing of the deficit was formulated highly ambiguously, but the Health Ministry confirmed that the objective of the regulation is that producers would contribute to the coverage of the deficit in ratio of the surplus of their subsidies relative to the subsidy they were granted in the previous year.

The latest development is positive for both Egis and Richter, given that the size of their subsidies will not be larger in 2007 than this year.

Just how these measures will affect the profitability and net worth of the two majors is, at this stage anyone's guess. But as Portfolio Hungary point out given the inbuilt tendency for the demand for medicines to grow it is hardly likely that the current measures will produce a net reduction in the budget:

At the same time we must keep in mind that drug subsidies have been growing dynamically for years. Annual average increase reached 17% since 1997 and has accelerated since 2001. Considering the rise in consumption in the past years we believe the government's measures would be enough only to halt growth.

Naturally the drugs majors are resisting the idea that this will be the final version of the bill going into law, and the latest news is that they have asked President László Sólyom not to sign the bill on the grounds that it is unconstitutional:

The association of Hungarian drug producers (MAGYOSZ) has asked President László Sólyom not to sign a bill on drug subsidies into law and ask for a review by the Constitutional Court, Richter has announced on Wednesday.

The association will argue that the bill, approved by Parliament on Monday, puts an unfair burden on domestic producers and generic firms and is therefore unconstitutional.

"We're still in the process of spelling out our argument but we will send him our letter today," Reuters cited spokeswoman Judit Tóth as saying.

President Sólyom will have five days from the time he received the bill to decide whether to sign the bill into law, send it back to Parliament for reconsideration or ask for a constitutional review from the Constitutional Court.

Which is all well and good, except that in the meantime someone somewhere has to decide just how the Hungarian deficit is actually going to be reduced.
Posted by Edward Hugh at 7:39 PM