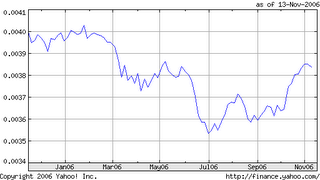 The forint reacted positively to yesterday's GDP and inflation news. Since the news wasn't exactly unequivocally good I can only read this as suggesting that it wasn't as bad as it might have been, but these are early days still. Obviously one way to read this reaction is that people imagine the central bank will still raise interest rates, and that the relatively poor eurozone performance might mean that the ECB will not raise very much, but this is still far from clear (Claus Vistesen has some interesting comments on this situation). Obviously in the short term any increase in the interest rate differential would be forint positive, but this would not necessarily be good news for GDP growth inside Hungary, since given the expected weakening in internal consumer demand and the programme of government cuts Hungary badly needs to export, and with the forint at these levels (and possibly the eurozone slowing into 2007) this isn't necessarily going to be at all easy.

I have included a one year yahoo finance chart on the movement of the forint in this post, and it is clear that the forint has recovered most of the ground lost in the summer, so there will not be so much competitive advantage to be extracted, which makes, quite frankly, the current high inflation levels rather worrying. Bottom line: you need to think about the complete macro picture to see what is happening here.

Following October inflation figures and Q3 GDP data published this morning, the Hungarian forint broke out of its 258.50-262.00 range it has been confined to this month. The HUF firmed to 258 against the euro, a level not touched since mid-March. In late afternoon trade the forint was seen stabilising at 258.00/50 to the EUR.

The October inflation data (+6.2% yr/yr vs. 5.9% in Sept) prompted market participants to put off their expectations for the end of the rate hike streak a little bit further in time. The figure hints that the Monetary Council will decide on yet another 25-bp hike to 8.25% at its 20 November policy meeting.