Well, in amongst all this high powered technical and financial information we are all so obsessed with at the moment, the real economy goes on. And today we have just one more little data point to put in our log books. Unemployment in Hungary rose slightly - to 7.7% - in the third quarter, up from 7.5% in the June-August period, according to the latest labour market report from the Central Statistics Office (KSH) this morning (Wednesday). The number of unemployed was up by 10,500 from the previous three month period and by 20,800 from the third quarter of 2007. 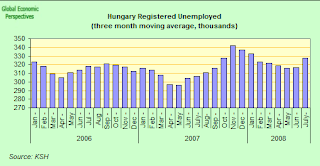 KSH also reported that there were 327,700 unemployed and 3,924,300 people in employment during the July-September period. This compares with 3.914 million employed in June-Aug and 3.947 million in the same period one year earlier. So employment is up on the month, but down on the year. If we look at the chart for the numbers in employment (below) it is clear that the long term trend is down, with each annual wave peaking just that little bit lower.

This trend is, of course, not surprising, given Hungary's ageing population problem, and the numbers of people of working age continues to decline. One way round this issue would be to raise the employment rate of those in the 15-64 age group, but this is remaining pretty stationary, and was at 57.3% in the third quarter, as against 57.1% in the previous three months and down 0.4ppt from the same period last year. 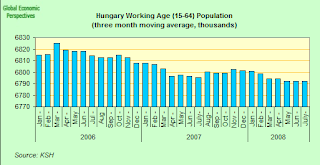 The KSH said 50% of all unemployed have been seeking jobs for a year or more and that the average duration of joblessness was 18.8 months, down slightly from the 19 months registered in June-Aug.
Posted by Edward Hugh at 1:16 PM

You often emphasised the demographic problem. Am I right in thinking of the following issues:

1. Less people produce less. Even if productivity improves, there is a competitive disadvantage against countries where population is not decreasing at such a high rate .
2. A higher average age of the active population probably means that there is a lower willingness generally to take risks, and to innovate.
3. Less inhabitants should mean less demand for property, and so property prices may decline. Lower property prices lead ultimately to less capital available for investments.
4. The government may not be able to sufficiently reduce expenditure to keep the budget deficit down, while less and less people work for the money needed for old age pensioners.
5. The cost of labour, and especially of the necessary skills, the supply of which will be more and more reduced, will be increasing.

The question is, I think, if the current trend will continue or it will turn round at some stage. If we don't entirely understand why we have this trend now, we cannot exclude the possibility of a turnaround either. Also, if I am right about declining property prices because of the declining population, then cheap property may attract foreigners, who will at least consume (if they are old age pensioners), or also produce.

"You often emphasised the demographic problem."

Yes, that is right. My opinion is that that is why so many of the official and mainstream growth forecasts are so often wrong - not becuase economics can never be a "science" - but becuase they don't "factor this component in" when using their growth models.

We know the issue is there - although for some strange reason many assume that it won't have any impact till after 2025, or even 2050 - and the real problem at this point is calibrating the impact.


"Am I right in thinking of the following issues:"

"Less people produce less. Even if productivity improves, there is a competitive disadvantage against countries where population is not decreasing at such a high rate."

Well, this is surely the case, but let me be pedantic. The issue is STRUCTURE, not simply size.

Size in itself doesn't matter (Iceland doesn't perform worse than India from any kind of size necessity), although changes in size to matter, but most particularly becuase of the impact on age structure.

Inward immigrantion into countries like Spain, the UK and the US has been beneficial (let's leave out the bank crisis part for the moment) due to the young age of most of the population involved.

Perhaps the evidence on this wasn't so clear until the last business cycle, but we have seen Germany and Japan create very large numbers of jobs (something which Hungary has conspicuously failed to do (I never said it was ALL demographics, labour market reforms can help to get more people in the upper ages working, and Hungary really badly needs reforms here, I am simply saying don't expect the same sort of virility shot as you would get if the new workers were in the 35 to 50 group). Anyway, Germany and Japan have added large numbers of workers in the over 55 age range, but the job content and productivity impact of this has been very low indeed.

So it has saved the state a lot of undemployment benefit and pension payments (and this is good due to the fiscal pressures) but comparatively little has been added to the net national worth for the number of jobs produced.

Indeed, in Germany they have still been adding jobs even as the the economy has contracted (for two quarters now it seems). By definition the productivity input here is very low - if not negative at this point. Italy - incidentally - show the same pattern, but the issue is more complex in Italy, since they don't even manage to generate a current account surplus. The outlook for Italy is bleak indeed at this point.

The key issue is that in all three cases (these are the three countries with 43 median ages) domestic demand is very weak, due to the proportionate lack of people in the high "borrowing" age groups.

Ironically, in all three countries the banks have lost lots of money (future pension savings??) not from guelling a donestic construction boom, but by investing in the booms of those younger societies (in median age terms) who did have them.

"2. A higher average age of the active population probably means that there is a lower willingness generally to take risks, and to innovate."

Definitely. And look at the resistance people put up to "reforms" at the political level. It is a lot easier to get changes in younger societies like Brazil, India and Turkey. Italy is an absolute disaster area in this sense.

Also, think about creativity. All those new internet and IT companies in the US etc. Young peoploe are often in the forefront. Of course, age isn't all a negative. There is still a thing called experience, which has its own importance, evidendtly. The important thing is the balance, the proortions. Arguably our societies have evolved with quite high proportions of young people (which undoubtedly give them energy and vibrance) and now, for the first time in the history of our species the thing is switching round.

Yep. You've got it. But do remember the credit assuming component, which is what makes this process rather non linear, since credit is a fast forwarding of anticipated future earnings, and if future earnings may go down (as an national aggregate), then it becomes much riskier to bring them forward.

"4. The government may not be able to sufficiently reduce expenditure to keep the budget deficit down, while less and less people work for the money needed for old age pensioners."

Oh, this is the big one I'm afraid.

"The question is, I think, if the current trend will continue or it will turn round at some stage."

Well, it could, but following my well known principal let's "black box" that for the time being, since as you say, we don't know, we haven't been here before. But what we do know with some exactitude is the number of people who will be enetering the Hungarian labour market (from natural Hungarian births) between now and 2028, since most of the people have already been born. I would say this is a long enough horizon to go to work on, and during all this period all those factors which you have mentioned will be operating.

So why are all those analysts expecting some "miraculous" recovery?

I would say there are two significant unknowns over the twenty year horizon in Hungary, life expectancy and immigration, and the government need to go to work on both of these, since both of them are, to some extent, within their power to change.