The Hungarian economy grew in the second quarter at the slowest annual pace in more than a decade following the introduction late last year of a strong austerity programme which involved the government cutting public jobs and raising taxes, with a consequent strong knock on effect on consumer spending and investment. The statistics office today revised downwards the second-quarter 2007 GDP growth figure today from 1.4 percent reported earlier. This means - at 0.1% growth in the second quarter itself - the Hungarian economy is now in effective zero growth mode, and the outlook entering the second half of the year seems set for negative growth.

Hungary's year on year growth rate fell in the second-quarter economic growth to 1.2 percent, the slowest pace among the European Union's eastern members. It compares with 2.7 percent in the previous three-month period, the statistics office said today. Here are the relevant charts: 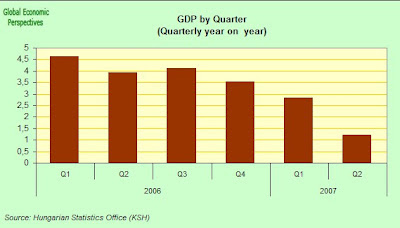 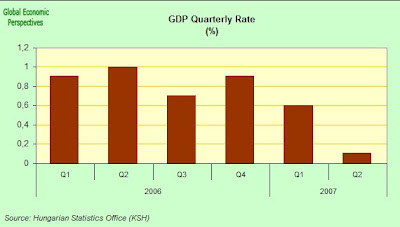 The engine of growth continued to be the industrial sector with 7.8% yr/yr growth, which was largely driven by a 14.6% increase in export demand. Household consumption fell 3.3 percent, after declining 0.8 percent in the first quarter. Government consumption was 2.8 percent lower. Gross fixed capital formation rose 0.8 percent.

The decrease in the services provided by the government sector took its toll as public consumption declined significantly as a consequence of the austerity measures.

Despite the slowing growth the central bank will have a hard time taking any decision to cut the benchmark interest rate from 7.75 percent for a second time this year in the current financial environment given the dependence of so much private debt in Hungary of foreign currency denominated credit and the impact rate reductions may have on the value of the forint. Rate setters will next meet to decide about any possible rate change on Sept. 24
Posted by Edward Hugh at 12:47 PM